Twisted Wheel formed in February 2007 by two former members of The Children, guitarist and singer Jonny Brown and bassist Rick Lees. Brown and Lees were joined by drummer Adam Clarke[1]. The band took their name from Manchester’s northern soul nightclub, the Twisted Wheel, having been inspired by Oasis naming themselves after a Swindon music venue[2]. A week later, they played their first gig at Viva indie club in Stalybridge. Twisted Wheel where booked as one of the support acts for Oasis‘ 2009 Heaton Park concerts. 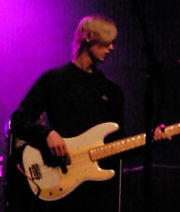 The band spent much of 2008 touring, including an acclaimed homecoming gig at the Manchester Academy[7] in September. They supported bands including Kasabian,The Pigeon Detectives and The View [8], played the Reading[9] and Leeds[10] festivals, and have been announced as the main support acts for Oasis[11] in January 2009 and The Enemy[12] in March 2009. Their sound has been described as old school[5] gritty rock ‘n’ roll[13] reminiscent of the Arctic Monkeys and the Clash[1]. The band have been noted as “a breath of fresh air” by Liam Gallagher[14]. They also have a fan in Paul Weller, who came to watch them at London’s 100 Club and subsequently invited the band on his summer forest tour in 2009[15].

Since releasing the album the band have confirmed that they are working on new material and are due to release an EP early 2010. The follow up to the band’s debut album will be released some time this year and have “more hardcore rock n roll punk noise with deeper words and points to be made about the sad state of the music industry in England.” There is also talk of a new member joining the band “to sing harmonies and choruses and add something to the sound.”[19]