The Orange VT1000 is the world’s first all-digital, portable tube (valve) tester. But what exactly does that mean? Well, it means that we took all the technology that formerly went into this: 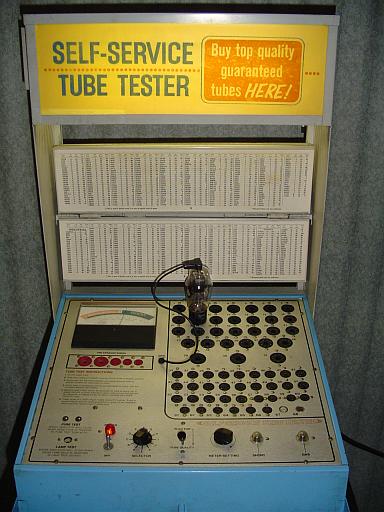 And fit it all into this little guy right here: 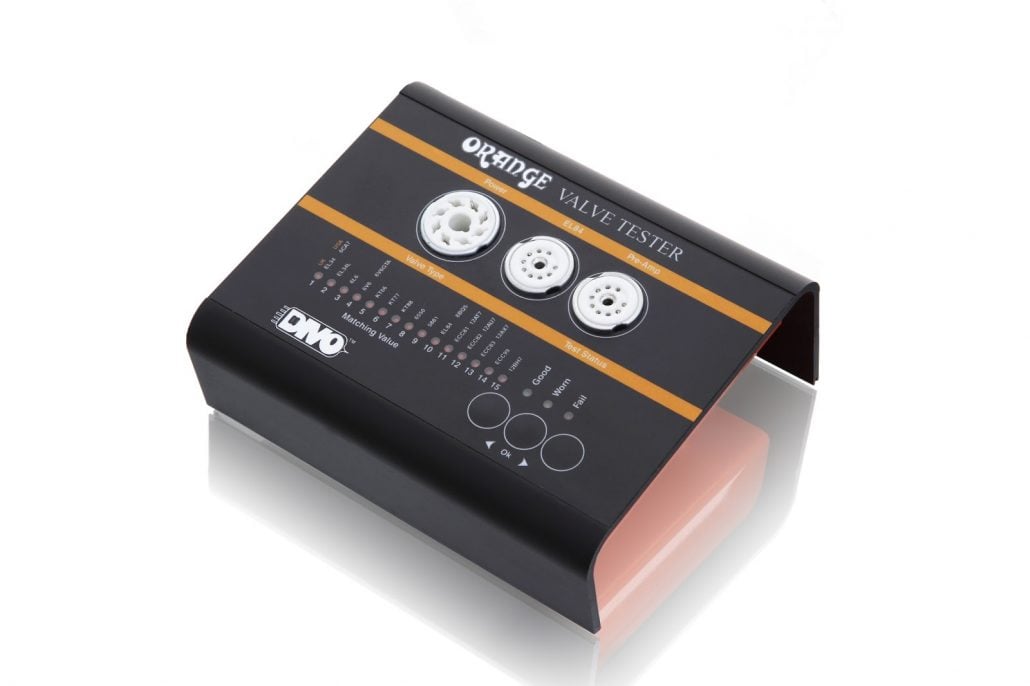 You may want to ask yourself why nobody else did this already. After all, it makes perfect sense. If 40% of the amps purchased today are tube-driven then shouldn’t the technology associated with TESTING those tubes have, ya know, EVOLVED a bit since the first tube amps were produced? The answer is “not necessarily” and the reasons are many. The assumed difficulty of testing your own tubes. The acquisition and maintenance of a vintage tube tester. These are great reasons not to have previously tested your own tubes.

But the main culprit is the attitude some tube amp players take towards the little glass life-blood of their amps. I asked five guitar player friends why they didn’t test their own tubes and four of them answered “Why would I do that?” These are people who are fully aware that the VT1000 exists and regardless of how many times I’ve reminded them it exists the idea still hasn’t stuck. So I’m going to lay it out for you right now. These are the reasons you should test your own tubes:

It will make you sound better.

You’ve got your amp sounding awesome. You go to practices and play shows and this awesome tone is just as awesome as it can be. Then, one day, you notice it’s started to lose a bit of gain on Channel A, and only on Channel A. You ask your friends if they can hear the change and they’re all “dude, you’re just drunk, it sounds the same.” But you KNOW it doesn’t sound the same and so you freak out about it all weekend, adding pedals and checking cords and changing out guitars. Nothing is fixing the problem!

Here’s the deal: it’s probably a preamp tube, especially if it’s only affecting one channel. With a VT1000 you could test all the preamp tubes in about 8 minutes, identify the bad tube, and throw in a new tube. More than likely you’ll be back at full gain in under 20 minutes total. And here’s where it gets better, because instead of trashing the so-called “bad tube,” testing the tube will allow you to arrive at a number of 1-10 indicating how much strength is still in the tube. That’s called the “matching number” and you can use it to “match” that tube with other tubes like it. The benefit to “matching” tubes is that you can essentially control the gain, and therefore the tone, of your amp. So instead of throwing away what you assume to be a tube-gone-bad, hold on to it for those times when you want to change up your sound. 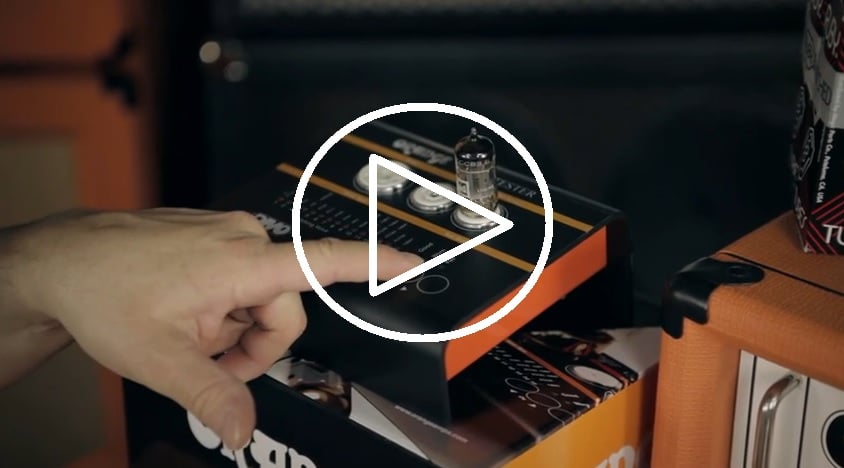 Watch the demo video for the VT1000 on YouTube

It will save your butt.

You finally got that coveted opening slot for Yanni and your band, Fart Quality Control, practiced for a whole 90 minutes before the gig (hey, it’s hard to be a lawyer, dad, Boy Scout Leader, bird enthusiast, and have time left-over for rockstar-ing). You arrive 9 hours early to the venue to make sure there aren’t any snags. The soundcheck goes well, Dr. Richard Felter is absolutely shredding the uke and the back-up singers, your wife and probably her friend from PTA, are all really on point. This is guaranteed to be the single best experience this group of parents that started a band solely for the purpose of getting away from their kids one a day week has EVER had.

The lights go down. The announcer exclaims “without further ‘o-dor,’ here’s Fart Quality Control!” And suddenly your amp takes a dive. You’re getting no sound. Dr. Felter freaks out. He’s usually so calm and collected when he’s at the hospital performing life-saving surgeries 14 hours a day. But this isn’t the hospital. This is the biggest moment of his life, opening for Yanni, his favorite ethereal pianist, and it’s all come crashing down because you couldn’t test the tubes in your amp before the show.

He takes off his uke and bashes it into the PA. Sweating bullets, Dr. Felter picks up a large piece of the splintered wood and rushes towards the mellophonist. The B-flat scream through the muted chambers of the horn signal his demise. The doctor rampages across the stage and, one by one, the members of FQC fall. All the while you’re still playing with the knobs on your amp.But there is no power…there is no power.

If you had tested your tubes before your show you would have saved a lot of lives.

Seriously though, knowing which tubes are wearing out can make or break a live gig. The smart guitar techs for major touring bands have a reserve of tubes on hand at all times. When they get into a new town and start load-in one of the first things they do is test the tubes in their amps. Drew Foppe, tech for Lindsay Buckingham of Fleetwood Mac, tests and replaces ALL the tubes in ALL the amps EVERY SINGLE DAY. (Is that necessary? If Lindsay asks you to, yes. But still, probably not. Tubes have a “play in” phase and usually sound best after about 10 hours of jamming.)

The point is that tubes can go bad quickly and without any early indication that’s audible to the ear. If you test your tubes prior to a big gig, you might find that what were 4 previously matching power tubes have become 3 matching tubes and 1 tube that’s several numbers off from matching. If you’ve got a Class A amp rated 30 watts or under then it could be as simple as throwing a new power tube in the amp. If you’re playing a 100 watt beast that requires biasing when replacing power tubes, you might just reconsider playing the amp at all that night, or having a back-up plugged up ready to rock in case of a failure.

It will also save you buttLOADS of money.

Literally, and this is not a fake number I just made up, but LITERALLY 75% of the technical service issues Orange encounters on a day-to-day basis are tube-related. That’s not because our tubes are low quality or because tube gremlins actually exist (even though they totally do and I’m tired of being considered an “outsider” for my belief in them). It’s also not a result of the shoddy build quality of our amps. We make the tanks of the amp world. No, it’s because tubes are made of thin glass, are gas-pressurized, and contain strands of metal so delicate they can only be handled by tube gremlins (I’m not letting this go). They are going to break and when they do it is going to cost you money.

Don’t take it straight to a tech or service center. I know you’ve “got a dude,” and he’s the “only guy you let touch your amp,” but if 75% of the tech calls we get on a daily basis are tube-related then don’t you think it’s worth considering a tube as the culprit? Don’t rush out the door with your wallet in hand. If you can identify the tube that’s causing the issue then you’re half way there already. If it’s a preamp tube then you can usually swap it yourself. If it’s a power tube then which one and are the others still good? Knowing the answers to these questions can give you the knowledge to keep your tech from performing unnecessary service. Most of the time when our techs find a single faulty power tube in a customer amp they’re able to replace that tube and that tube only. This doesn’t change the fact that any amp over 30 watts needs to be rebiased anytime you change a power tube. But it might save you significant cash when you can safely answer “no” to the question “would you like me to replace ALL of your tubes?”

Changing tubes is like changing the oil in your car. It’s a requirement. You might be able to go further between some oil changes than others, but inevitably you end up back at the garage.

I’m not advocating that you perform any major service on your amp. All you need to know is how to remove your chassis from the wooden sleeve or metal casing or whatever holds your amp together (string?). Obviously make sure the amp is unplugged and if you’re not a tech don’t go touching components that you don’t understand. Some things in there can shock you. But if you can remove the housing then you should be able to pretty easily access your tubes. Here’s a quick video about it.

Congratulations! You can now test your own tubes and reinvest all the money you save into orange-colored amps!