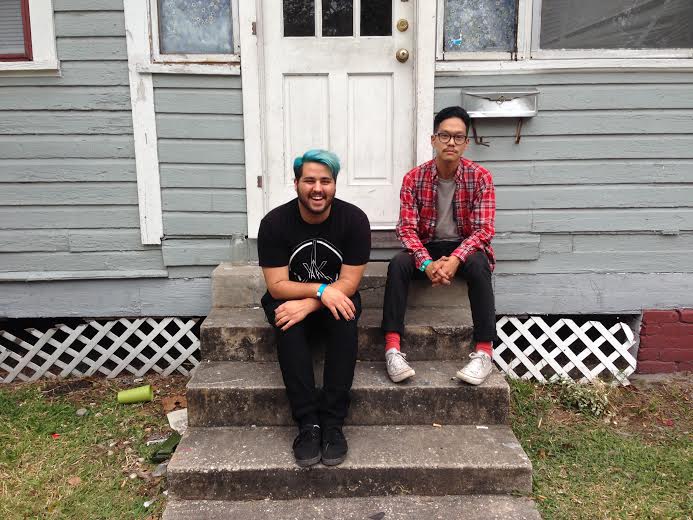 Orange: Why don’t you guys introduce yourselves.

JP: I’m JP and I do vocals in Rescuer

Andrew: I’m Andrew and I play guitar in Rescuer

Orange: How long have you guys been a band?

Orange: You guys are on No Sleep Records correct?

JP: Yeah! That’s a new development. We did our last record with Rise Records and I hit No Sleep up asking them what they thought of it, because that’s one of my favorite labels and they’ve been killing it for the past couple of years. I met those dudes a couple of times and they were really psyched on us and it all kind of just worked out really well.

Orange: Do you guys have any new music coming out?

JP: Yeah, when we get home from FEST we are going to start finishing our record. In January we are going to record with Jack Shirley who recorded Deafheaven‘s newest record, he’s actually recording Frameworks as well and there is a band from Jacksonville called The Caution Children, who are good friends of ours, they recorded there as well.

Orange: You guys just got to tour with Frameworks, how was that?

JP: That was back in April, those are close friends of mine so it was really cool. A lot of shows were a little weird but I enjoyed it. What did you think?

Andrew: The shows were kind of strange as far as location. Venue wise I don’t know if it was the most well suited choices but it was definitely a different experience for each of our bands because we are so new compared to what’s going on there.

JP: It was cool because we were all friends before the tour but now we are super close. Actually after tour Frameworks did a tour in July for about a month and I went with them so it was really cool. I love those dudes.

Orange: So what’s an example of a weird experience you had on tour?

JP: On the Frameworks tour we played a place in Fayetteville, North Carolina and we got to the venue, I’ll disclaimer, they were great people at the venue I enjoyed myself in the long run but when we got there it’s this place called the Drunk Horse Pub and I guess the best way to put this it was like a shopping center and legitimately there was the venue and like eight strip clubs in this place.

JP: No there was a bountiful amount of strip clubs.

Andrew: That’s what I meant as far as venues-wise. We had the strangest combinations of people come every night.

Orange: Did people from the strip clubs come and watch you guys play?

JP: Yeah they owned the venue as well.

Andrew: There was a place next door called The Pump House which I guess was a massage parlor and they tried to wave us in but we didn’t end up going.

Orange: Does that decision haunt you?

Andrew: Yeah I think we should have. Actually I have one story better than that. On that tour I pulled the best prank of my life. So we played in New Jersey and I was by a river and I found this rock right next to a broken beer bottle and I had it in my pocket for like a week. Well we ended up playing DC on that tour. So Frameworks and us we all went to the Air and Space Museum so I was like “I’m going to put this rock somewhere where people will think it’s from space” and they were all like “bullshit”. So I walk in and there’s this podium in the middle of the room and it’s a moon rock display. So I just walked up and put this rock in the middle of this podium, it looked so perfect, and after a while there was a line of people waiting to see this “moon rock” and they were all taking pictures. That was probably the best tour experience of my life.

Orange: I have this feeling if that were the case they wouldn’t let anyone touch it.

JP: Yeah, that’s why I was like do these people really think it’s real and they can just go pick it up? I was telling them I want to go back and take it back, because it’s my rock, like go back and take it and just leave to see what people would do.

Andrew: I think the best part was checking the aftermath via the internet, like Instagram, and we went to the locations people checked into for the National Air and Space Museum and we clicked on that and one of the pictures was just a really well shot picture of a hand holding the rock in the light and it’s like #moonrocktouching #space #moon and it got over 100 likes.

JP: Yeah that was a real shinning moment.

Orange: So what kind of equipment are you using on tour?

Andrew: I use a Fender Jazzmaster through a Fender Hot Rod DeVille 4×10. I’m thinking about using an extension cab because it’s so bright. I run a few pedals, I play the Fender clean and I crank it and get the natural peak and make it clip a little because I like that natural distortion. Then I run a TSVG overdrive pedal, they’re a company based out of Philadelphia, they make really cool overdrive and fuzz pedals, highly recommended. I also run a Big Muff into a Crybaby Wah and that into a tiny reverb pedal by Mooer called the Shimverb. I like to keep it simple and just try to get that natural tone as much as I can.

Orange: You used that Orange back lined gear. What did you think of it?

Andrew: Yeah I used that Thunderverb 50. I like Orange a lot, I love the bright English tone you get out of it. I always liked old school Marshalls and I feel like the Orange Thunderverb is a modified, much better version of a JCM 800, so I really like it for that factor. It’s also very versatile too, I really like the Orange Rockerverb how it has the Dirty channel, put the reverb up a little bit, keep my treble down, mids up, bass up. Like I said I like to keep it simple and Orange really lets me achieve that. Very simple and yet bright, very trademark tone.

JP: Michael, our other guitar player played the Rockerverb yesterday. He was excited about it and really wants one now.

Orange: So I noticed when watching you the other day you write about a lot of very personal things to you.

JP: Yeah a lot of those songs didn’t start out as songs originally, it was more so just stuff I had written down. So when the band started I already had material and at first I was like “should I use this, it’s kind of weird things to talk about” and we did anyway and I never really spoke about it. Recently though I thought there’s a lot of things in those songs, all though personal, people can relate to them so I just started explaining my intent. It’s been cool this past tour is the first time I’ve really began talking about it.

Orange: So what’s your writing process like, as far as structuring songs and using lyrics you already have written?

JP: As far as lyrics go a lot of it is just me stewing in my room. A lot of it is random stuff that never gets used in songs.

Andrew: As far as the new record goes it’s been a lot more cohesive. We have more individual input, each individual member has their own flavor so it makes things much more dynamic.

Orange: So who are some of your influences?

JP: On a personal level mewithoutYou is a huge band for me. When I was a lot younger I would go see them and I loved the way Aaron would deliver was just my favorite thing. Other than that I listen to a lot of Envy, they’re probably my favorite band. Actually one of my favorite bands played this fest, Bridge and Tunnel, they’re a big influence on me. Lyrically they write about a lot of personal themes and relate them into a lot of societal issues and that’s big for me.

Andrew: I would say as far as a musician I prefer to involve my own style in my playing. Bands like Sonic Youth and The Jesus Lizard reflect on my playing even though our sound is more melodic and modern.

JP: A lot of things that I catch myself listening to everyday I can’t say really influence me because you couldn’t really tell from listening to us. Probably my favorite band of all time is The Smiths, and I also love The Cure, Joy Division, pretty much any British new wave.

Andrew: Back in the RV where we have power, if we were able to find a functioning outlet, it was a game changer because it has a built in microwave. Considering that we changed our diet, instead of daily runs to Taco Bell we’d just make Tasty Bite. We do have restricted diets we’re all vegan and vegetarians.

JP: So yeah the diet thing has been cool this time around because of the microwave. On most tours I’ll do my best to experiment and go to nice vegan restaurants but we’ve been travelling so much we’re all broke so the microwave is a real savior for the vegan diet.

Orange: Do you remember the first time you saw an Orange Amplifier?

JP: First band I ever saw use an Orange Amp was Underoath, they’re from my area. They played out of Orange and it was just like the coolest thing. I guess they just got an endorsement so the next show I saw them they showed up and they had all Orange and it just looked incredible.

Orange: Anything else you guys would like to add?

JP: We have a new record coming out next year which we’re really excited about so keep a look out on that.

Orange: Thanks for talking with me guys!

Fest 12: Interview with The World Is A Beautiful Place
Scroll to top