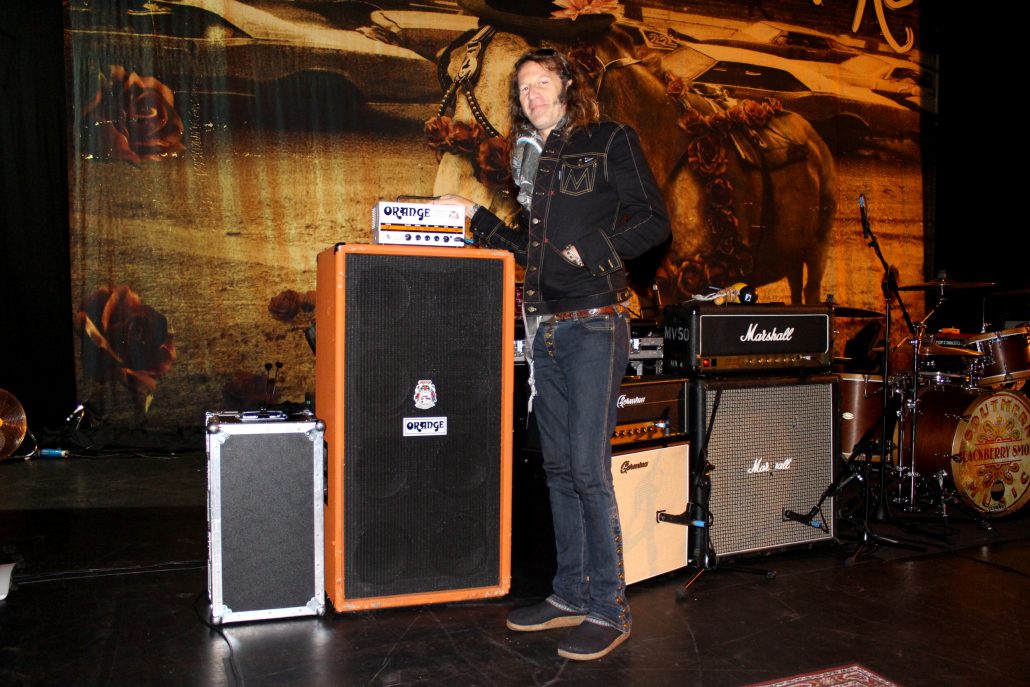 Can you please tell us about your history with Orange?
I always wanted an Orange amp because Black Sabbath was playing them, and they were pretty hard to find in the States back in the day. We also played that NAMM show in Anaheim for Orange’s, I think it was their 40th anniversary, and we met all of the Orange people, and obviously the backline was all Orange, and I told them “I’d like to take this home with me.” and they said “Ok”, and I was like “Oh, that’s very, very nice of you!”, and I’ve been using Orange ever since.

What’s your set up then?
I had an old 15inch cabinet and a 4×10, and the MK3 200 watt head, which I love – it’s never given me any problems. After a while I needed something bigger, so I asked for the 1000 watt Tiny Terror head and an 8×10 cabinet and I’ve been playing them all over the US.

A lot of people that normally wouldn’t listen to country or southern rock still listen to Blackberry Smoke, why do you think that is?
We all come from different backgrounds, back in the day Brit and I were in a metal band called Nihilist, so we’re a band that can play a wide spectrum of music, and it boils down to good versus bad. When people say Blackberry Smoke is a country rock band that turns a lot of people off. I wouldn’t call The Eagles or The Rolling Stones country rock bands, but they both definitely did country rock-ish music at one point or another, outstanding country rock music. They also both did dance and pop music as well, and that’s why they’re both so good and still in business, they just appeal to such a wide variety of people as they instead of sticking a specific genre they stick to playing good music, whether that’s country, rock or something else. Another band like that is Motörhead. It’s a shame that so many bands get tossed around the genre machine and never manages to come out of it.

How is it being in a band that’s known to “always be on tour”?
We played less shows in 2015 than we did in 2014 and the year before that. In 2013 we played 255 shows, and when you tour like that over many years it does become a lot. We’ve started to cut back a bit because everyone’s got small children, except for Brandon. Which we know of, he might be making some children as we speak…

Sign-up to win 1 of 5 pairs of Orange O Edition headphones.

1050 musicians = The Worlds biggest band and a Guinness World Record!!
Scroll to top